In loving memory of Bruce Woods 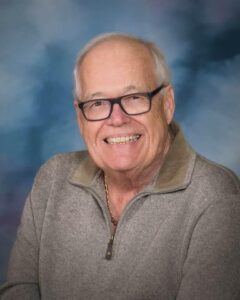 Bruce Woods, one of the founding board members of the Merrillville Education Foundation, passed away on Tuesday, January 5, 2021, at the age of 78. He was a retired Merrillville teacher and admired community member of Northwest Indiana.

Bruce served in the United States Army in the 1960s and later went on to teach English at Merrillville High School from 1971 to 1999. He served for a time as department head and as a faculty adviser for the yearbook and school newspaper, along with directing high school plays. He was also an involved member of the Merrillville Classroom Teachers Association during his teaching career.

As a member of the MEF, Bruce was the Grant Committee Chairperson since the foundation’s inception 19 years ago and the past president for the last 3 ½ years. His willingness to help at any event was inevitable, and he was always there to support the foundation in any way he could. Bruce also completed scholarship scoring for the Crown Point Community Foundation, volunteered at Harbor Light Hospice and worked with Merrillville and Hobart Meals on Wheels.

Bruce was very involved in his community, and served as a member of many organizations including the Lake Court House Foundation; Lake County Historical Museum; Lake County Historical Society; Old Homestead Preservation Society; Crown Point Historic Preservation Commission; Merrillville Education Foundation; Merrillville Classroom Teachers Association; Lake County Public Library Board of Trustees; Lt. Gov. Calumet Division of Kiwanis; Merrillville, Gary and Hammond Kiwanis; Times Editorial Advisory Board; Association of Indiana Museums; Lake Michigan Coastal Advisory; Appointed County Historian; and County Historian Preservationist, according to his obituary.
Bruce received the Legacy Foundation’s Volunteer of the Year award in 2000, as well as the Indiana Historical Society’s Hubert Hawkins History Award in 2002. He was an exceptional human being and will be greatly missed by all.